The Jumps are back!

Autumn has settled in and the National Hunt season proper is starting to get rolling, starting at Cheltenham this weekend.

The leaves are starting to turn, the nights are drawing in and enough tweed to carpet most of Scotland is being brushed down in preparation for some great jumps racing.

The main jumps season is starting to get into full swing and the Showcase Meeting, on Friday October 22 and Saturday October 23, is another sign that it’s about to hit top gear.

The two‐day feature often sees some of the best‐loved jumps stars returning to the track to take on horses who have excelled over the summer months.

Fergal O’Brien has had his team in sparkling form so far this season. The Cotswolds‐based trainer tops the trainers’ table both on winners and prizemoney. Having set a personal best of 104 winners last term, he has already notched up more than half that number this season.

Donald McCain, Richard Newland and Peter Bowen have also enjoyed successful summers, while champion trainer Paul Nicholls, Nicky Henderson and Philip Hobbs have all hit form in recent weeks as they begin to unleash some of their stars.

The home of jumps racing opens its gates for the first time this season and the two‐day meeting has attracted some high‐quality entries. Friday’s card kicks off with the Ballymore Novices’ Hurdle.

It’s been won by some smart horses in the past – including top‐class The New One – and has attracted no less than nine last‐time‐out winners in a total of 15 possibles.

The rest of Friday’s card is equally competitive. There’s an intriguing blend of handicaps, packed full of old favourites and potential improvers, combined with novice and maiden hurdles.

Saturday’s seven‐race card could see the return of several of last season’s top performers. Jonjo O’Neill has pencilled in Ladbrokes Trophy hero Cloth Cap and Grand Annual winner Sky Pirate for their first runs of the season in the day’s feature handicap chases.

The Masterson Holdings Hurdle has been won by some top horses in recent years. Sceau Royal, Dodging Bullets and even Tiger Roll all landed this two‐mile prize for four‐year‐olds before going on to win some of jump racing’s greatest races.

This year Tritonic, one of last season’s best juvenile hurdlers, is among a select list of six entries. There are some hugely‐promising horses entered in the Mick Turner A Lifetime In Racing Novices’ Chase and there’s sure to be a sprinkling of future stars on show in the Royal Gloucestershire Hussars Open National Hunt Flat Race.

Throw in a Pertemps Series Qualifier and it makes for a superb day’s racing, while Kelso also hosts a decent card at its picturesque course in the Scottish borders and not forgetting Grade 2 action on Sunday at Aintree featuring multiple Grade 1 winner Allmankind.

Stars of the season

As the Flat season gives way to the jumps, it won’t be long until some of the greatest chasers and hurdles will be making their return to action. Dual Champion Chaser Altior, the premier two‐miler of recent seasons, has been retired but Nicky Henderson looks to have a ready‐made replacement.

Shishkin is, without a doubt, the most exciting jumps horse in Britain heading into the winter. The 2020 Supreme Novices’ Hurdle winner switched to fences last season and was simply stunning.

He won all five of his races, including a 12‐length Arkle Trophy success at the Cheltenham Festival. All the top two‐mile races are sure to be on his agenda. 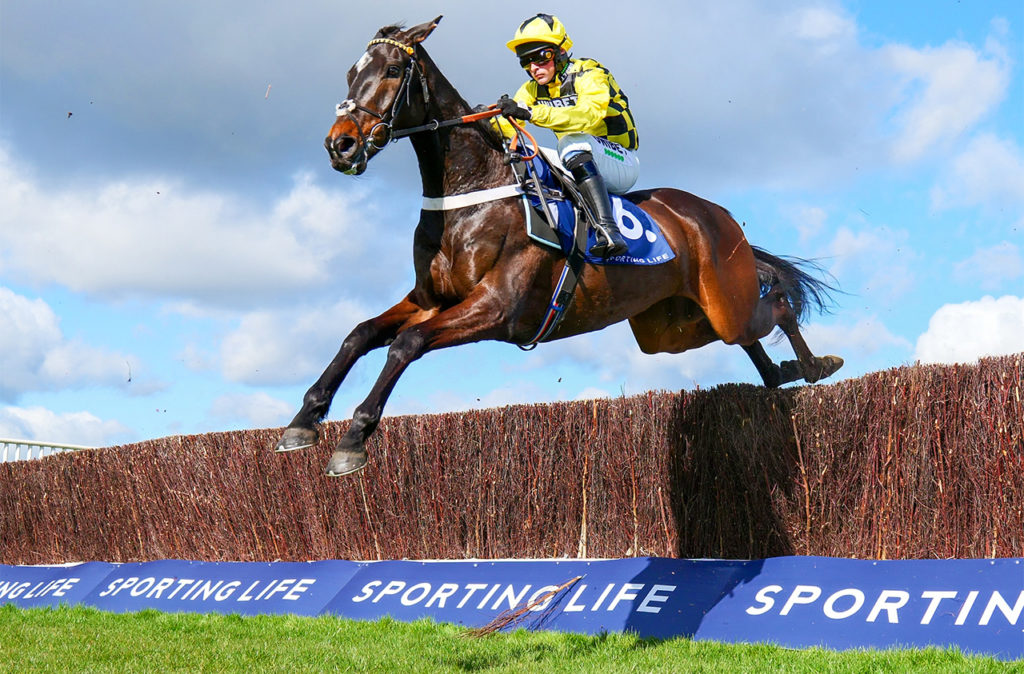 The first Grade 1 race of the season, the Betfair Chase, will soon be upon us. Mud‐loving grey Bristol De Mai will attempt to match Kauto Star’s four wins in Haydock’s top chase.

Paul Nicholls is sure to be aiming his King George VI Chase winners, Frodon and Clan Des Obeaux, at a return to Kempton in Boxing Day, while the champion trainer will also have high hopes for top‐ class performers Cyrname, Politologue and new recruit Saint Calvados.

There were some great races last season but, perhaps, the most absorbing of the lot was the battle for the Jump Jockeys’ Championship. Harry Skelton eventually got the better of reigning champ Brian Hughes in an exciting tussle in the closing weeks of the season.

This summer Hughes, who took the champion jockey’s crown from Richard Johnson in 2020, has been in superb form. The northern‐based rider has streaked into a commanding lead from Sean Bowen, Paddy Brennan and Sam Twiston‐Davies.

Skelton is not even in the top ten but, with the backing of his brother Dan’s powerful Warwickshire stable, he is sure to start firing in the winners in the coming weeks.

This winter promises to be even more exciting, not least because the crowds that were absent for the vast majority of last season are back.

Jump fans have been deprived of being able to watch their heroes on the track for much of the last 18 months so they are likely to come flooding back to witness what is sure to be some spectacular sport. It is shaping up to be an unforgettable jumps season.